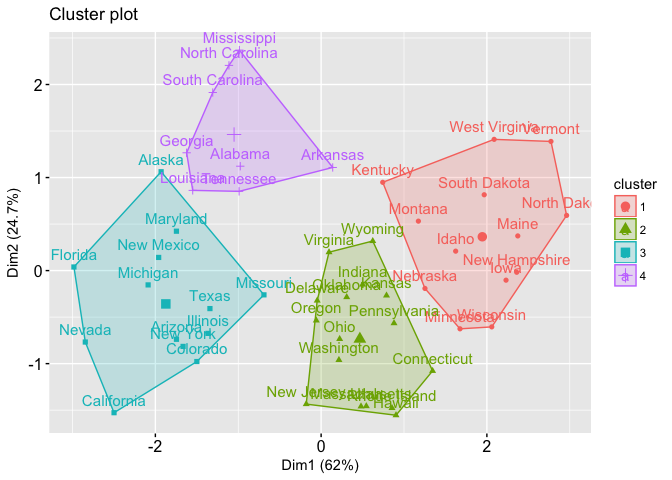 This tutorial serves as an introduction to the k-means clustering method.

To replicate this tutorial’s analysis you will need to load the following packages:

The classification of observations into groups requires some methods for computing the distance or the (dis)similarity between each pair of observations. The result of this computation is known as a dissimilarity or distance matrix. There are many methods to calculate this distance information; the choice of distance measures is a critical step in clustering. It defines how the similarity of two elements (x, y) is calculated and it will influence the shape of the clusters.

The choice of distance measures is a critical step in clustering. It defines how the similarity of two elements (x, y) is calculated and it will influence the shape of the clusters. The classical methods for distance measures are Euclidean and Manhattan distances, which are defined as follow:

Where, x and y are two vectors of length n.

Kendall correlation method measures the correspondence between the ranking of x and y variables. The total number of possible pairings of x with y observations is n(n − 1)/2, where n is the size of x and y. Begin by ordering the pairs by the x values. If x and y are correlated, then they would have the same relative rank orders. Now, for each , count the number of (concordant pairs (c)) and the number of (discordant pairs (d)).

The choice of distance measures is very important, as it has a strong influence on the clustering results. For most common clustering software, the default distance measure is the Euclidean distance. However, depending on the type of the data and the research questions, other dissimilarity measures might be preferred and you should be aware of the options.

Within R it is simple to compute and visualize the distance matrix using the functions get_dist and fviz_dist from the factoextra R package. This starts to illustrate which states have large dissimilarities (red) versus those that appear to be fairly similar (teal). 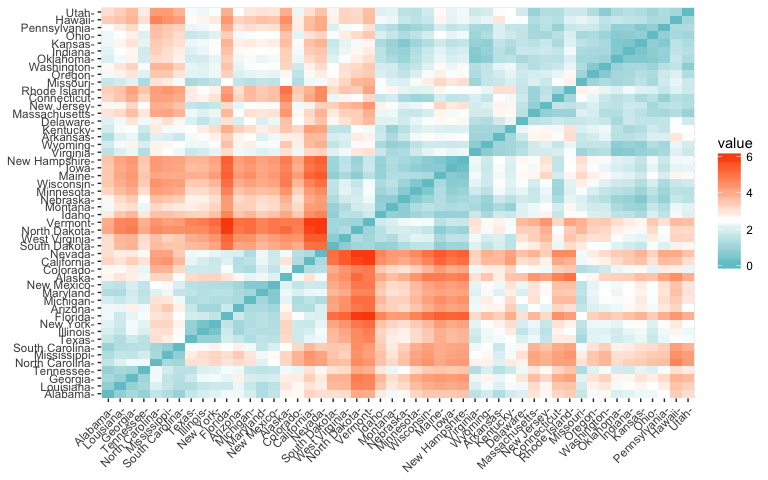 K-means clustering is the most commonly used unsupervised machine learning algorithm for partitioning a given data set into a set of k groups (i.e. k clusters), where k represents the number of groups pre-specified by the analyst. It classifies objects in multiple groups (i.e., clusters), such that objects within the same cluster are as similar as possible (i.e., high intra-class similarity), whereas objects from different clusters are as dissimilar as possible (i.e., low inter-class similarity). In k-means clustering, each cluster is represented by its center (i.e, centroid) which corresponds to the mean of points assigned to the cluster.

Each observation () is assigned to a given cluster such that the sum of squares (SS) distance of the observation to their assigned cluster centers () is minimized.

We define the total within-cluster variation as follows:

The total within-cluster sum of square measures the compactness (i.e goodness) of the clustering and we want it to be as small as possible.

The first step when using k-means clustering is to indicate the number of clusters (k) that will be generated in the final solution. The algorithm starts by randomly selecting k objects from the data set to serve as the initial centers for the clusters. The selected objects are also known as cluster means or centroids. Next, each of the remaining objects is assigned to it’s closest centroid, where closest is defined using the Euclidean distance (Eq. 1) between the object and the cluster mean. This step is called “cluster assignment step”. After the assignment step, the algorithm computes the new mean value of each cluster. The term cluster “centroid update” is used to design this step. Now that the centers have been recalculated, every observation is checked again to see if it might be closer to a different cluster. All the objects are reassigned again using the updated cluster means. The cluster assignment and centroid update steps are iteratively repeated until the cluster assignments stop changing (i.e until convergence is achieved). That is, the clusters formed in the current iteration are the same as those obtained in the previous iteration.

K-means algorithm can be summarized as follows:

The output of kmeans is a list with several bits of information. The most important being:

If we print the results we’ll see that our groupings resulted in 2 cluster sizes of 30 and 20. We see the cluster centers (means) for the two groups across the four variables (Murder, Assault, UrbanPop, Rape). We also get the cluster assignment for each observation (i.e. Alabama was assigned to cluster 2, Arkansas was assigned to cluster 1, etc.).

We can also view our results by using fviz_cluster. This provides a nice illustration of the clusters. If there are more than two dimensions (variables) fviz_cluster will perform principal component analysis (PCA) and plot the data points according to the first two principal components that explain the majority of the variance. 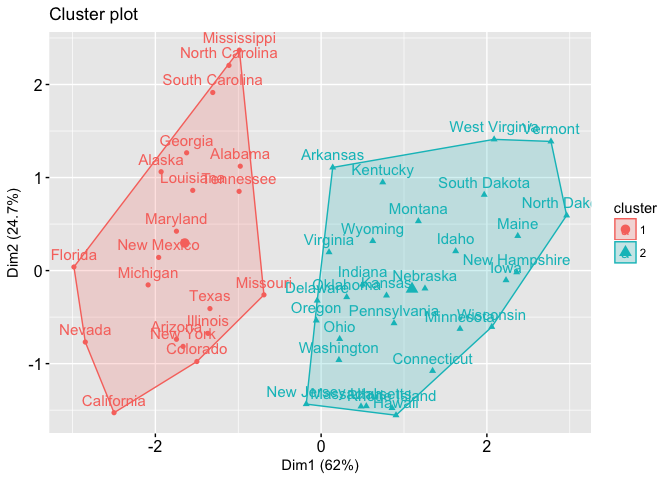 Alternatively, you can use standard pairwise scatter plots to illustrate the clusters compared to the original variables. 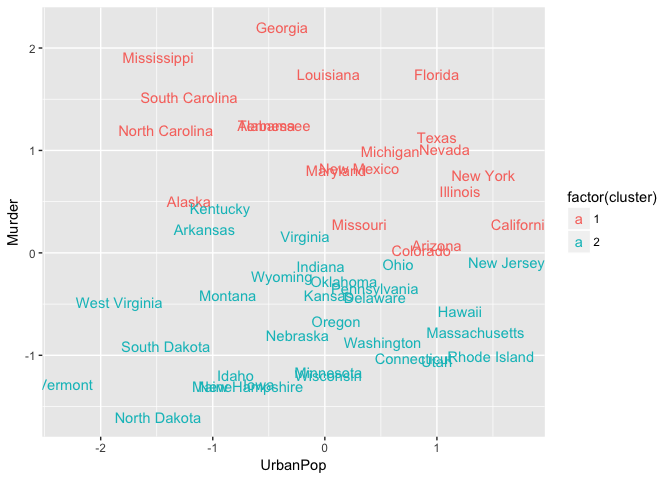 Because the number of clusters (k) must be set before we start the algorithm, it is often advantageous to use several different values of k and examine the differences in the results. We can execute the same process for 3, 4, and 5 clusters, and the results are shown in the figure: 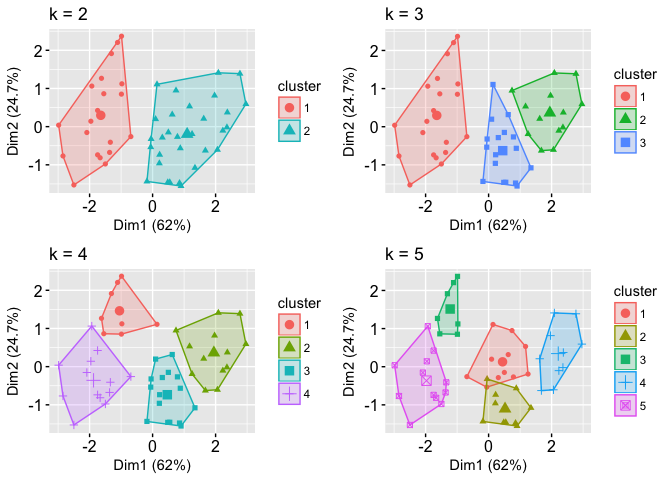 Although this visual assessment tells us where true dilineations occur (or do not occur such as clusters 2 & 4 in the k = 5 graph) between clusters, it does not tell us what the optimal number of clusters is.

where is the cluster and is the within-cluster variation. The total within-cluster sum of square (wss) measures the compactness of the clustering and we want it to be as small as possible. Thus, we can use the following algorithm to define the optimal clusters:

We can implement this in R with the following code. The results suggest that 4 is the optimal number of clusters as it appears to be the bend in the knee (or elbow). 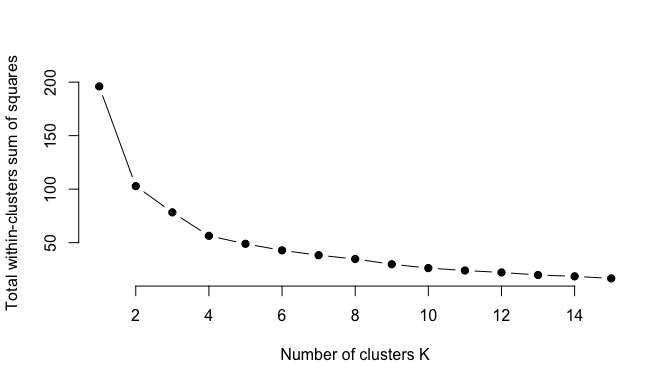 Fortunately, this process to compute the “Elbow method” has been wrapped up in a single function (fviz_nbclust): 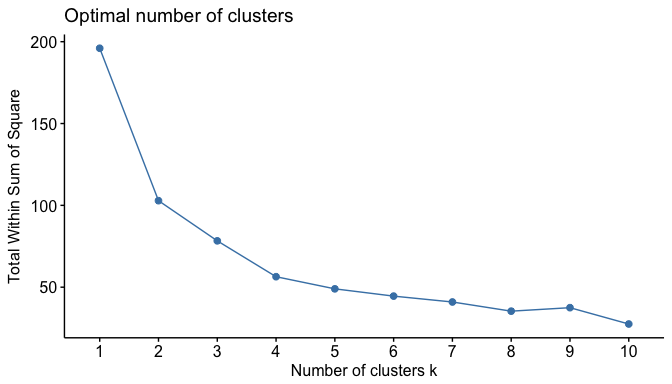 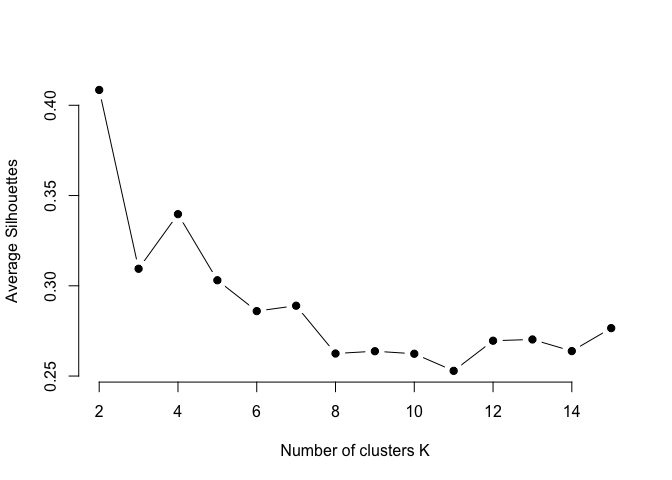 Similar to the elbow method, this process to compute the “average silhoutte method” has been wrapped up in a single function (fviz_nbclust): 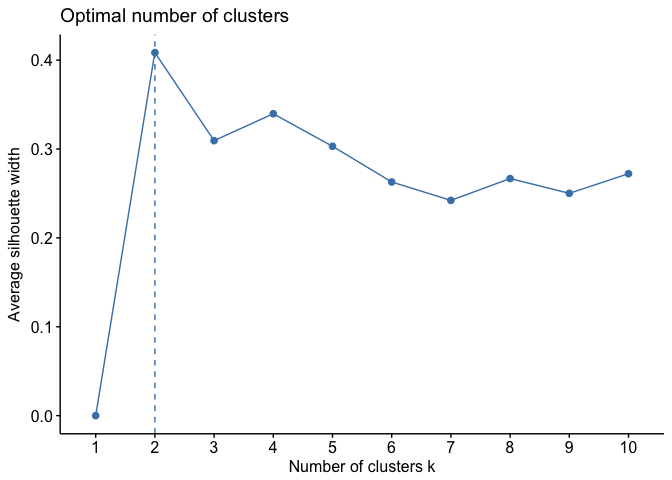 The gap statistic has been published by R. Tibshirani, G. Walther, and T. Hastie (Standford University, 2001). The approach can be applied to any clustering method (i.e. K-means clustering, hierarchical clustering). The gap statistic compares the total intracluster variation for different values of k with their expected values under null reference distribution of the data (i.e. a distribution with no obvious clustering). The reference dataset is generated using Monte Carlo simulations of the sampling process. That is, for each variable () in the data set we compute its range and generate values for the n points uniformly from the interval min to max.

For the observed data and the the reference data, the total intracluster variation is computed using different values of k. The gap statistic for a given k is defined as follow:

Where denotes the expectation under a sample size n from the reference distribution. is defined via bootstrapping (B) by generating B copies of the reference datasets and, by computing the average . The gap statistic measures the deviation of the observed value from its expected value under the null hypothesis. The estimate of the optimal clusters () will be the value that maximizes . This means that the clustering structure is far away from the uniform distribution of points.

In short, the algorithm involves the following steps:

We can visualize the results with fviz_gap_stat which suggests four clusters as the optimal number of clusters. 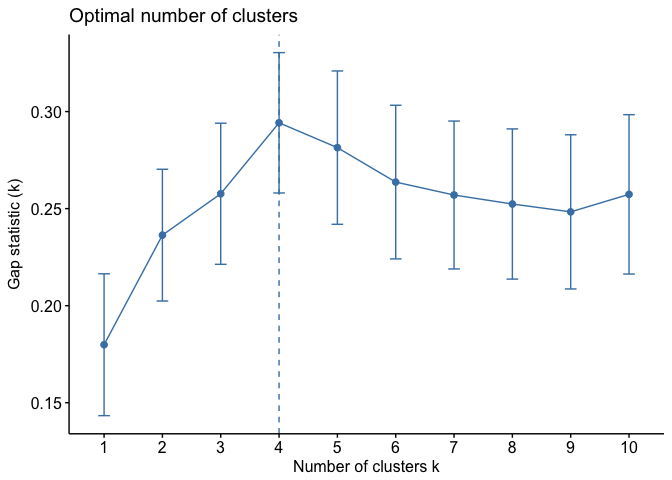 In addition to these commonly used approaches, the NbClust package, published by Charrad et al., 2014, provides 30 indices for determining the relevant number of clusters and proposes to users the best clustering scheme from the different results obtained by varying all combinations of number of clusters, distance measures, and clustering methods.

With most of these approaches suggesting 4 as the number of optimal clusters, we can perform the final analysis and extract the results using 4 clusters.

We can visualize the results using fviz_cluster:

And we can extract the clusters and add to our initial data to do some descriptive statistics at the cluster level:

K-means clustering is a very simple and fast algorithm. Furthermore, it can efficiently deal with very large data sets. However, there are some weaknesses of the k-means approach.

An additional disadvantage of K-means is that it’s sensitive to outliers and different results can occur if you change the ordering of your data. The Partitioning Around Medoids (PAM) clustering approach is less sensititive to outliers and provides a robust alternative to k-means to deal with these situations. A future tutorial will illustrate the PAM clustering approach.

For now, you can learn more about clustering methods with: