Once we have cleaned up our text and performed some basic word frequency analysis, the next step is to understand the opinion or emotion in the text. This is considered sentiment analysis and this tutorial will walk you through a simple approach to perform sentiment analysis.

The seven novels we are working with, and are provided by the harrypotter package, include:

Each text is in a character vector with each element representing a single chapter. For instance, the following illustrates the raw text of the first two chapters of the philosophers_stone:

There are a variety of dictionaries that exist for evaluating the opinion or emotion in text. The tidytext package contains three sentiment lexicons in the sentiments dataset.

The three lexicons are

All three of these lexicons are based on unigrams (or single words). These lexicons contain many English words and the words are assigned scores for positive/negative sentiment, and also possibly emotions like joy, anger, sadness, and so forth. The nrc lexicon categorizes words in a binary fashion (“yes”/“no”) into categories of positive, negative, anger, anticipation, disgust, fear, joy, sadness, surprise, and trust. The bing lexicon categorizes words in a binary fashion into positive and negative categories. The AFINN lexicon assigns words with a score that runs between -5 and 5, with negative scores indicating negative sentiment and positive scores indicating positive sentiment. All of this information is tabulated in the sentiments dataset, and tidytext provides a function get_sentiments() to get specific sentiment lexicons without the columns that are not used in that lexicon.

To perform sentiment analysis we need to have our data in a tidy format. The following converts all seven Harry Potter novels into a tibble that has each word by chapter by book. See the tidy text tutorial for more details.

Now lets use the nrc sentiment data set to assess the different sentiments that are represented across the Harry Potter series. We can see that there is a stronger negative presence than positive.

This gives a good overall sense, but what if we want to understand how the sentiment changes over the course of each novel? To do this we perform the following: 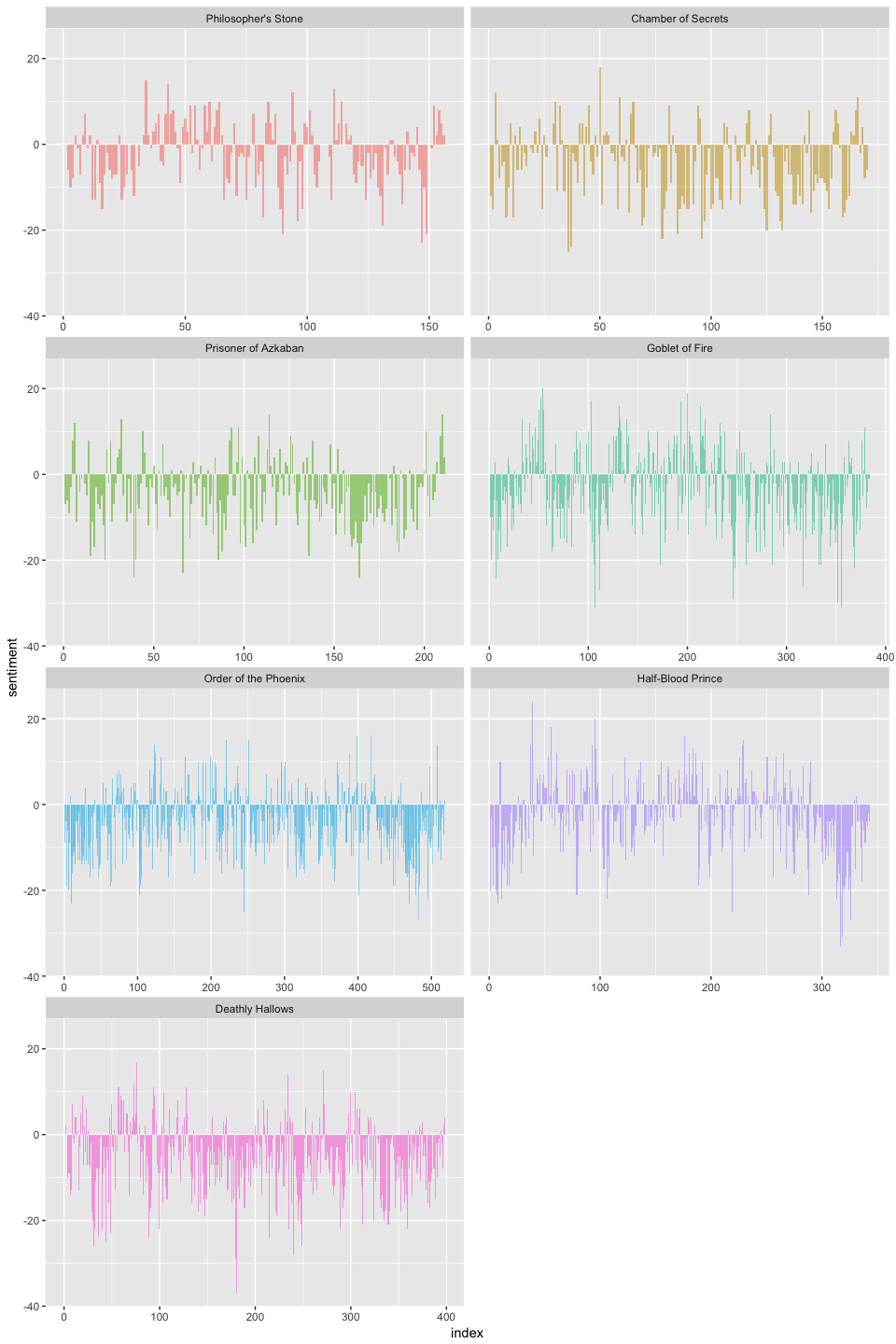 Now we can see how the plot of each novel changes toward more positive or negative sentiment over the trajectory of the story.

With several options for sentiment lexicons, you might want some more information on which one is appropriate for your purposes. Lets use all three sentiment lexicons and examine how they differ for each novel.

We now have an estimate of the net sentiment (positive - negative) in each chunk of the novel text for each sentiment lexicon. Let’s bind them together and plot them. 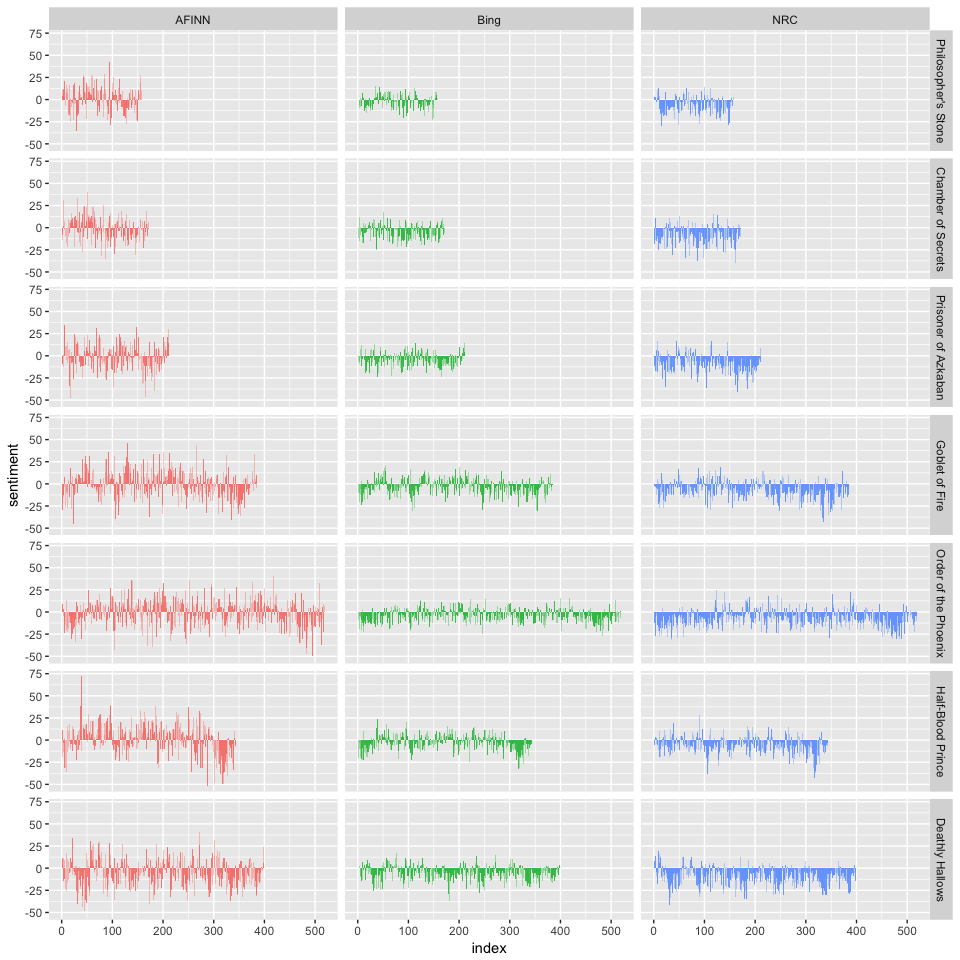 The three different lexicons for calculating sentiment give results that are different in an absolute sense but have fairly similar relative trajectories through the novels. We see similar dips and peaks in sentiment at about the same places in the novel, but the absolute values are significantly different. In some instances, it apears the AFINN lexicon finds more positive sentiments than the NRC lexicon. This output also allows us to compare across novels. First, you get a good sense of differences in book lengths - Order of the Pheonix is much longer than Philosopher’s Stone. Second, you can compare how books differ in their sentiment (both direction and magnitude) across a series.

One advantage of having the data frame with both sentiment and word is that we can analyze word counts that contribute to each sentiment.

We can view this visually to assess the top n words for each sentiment: 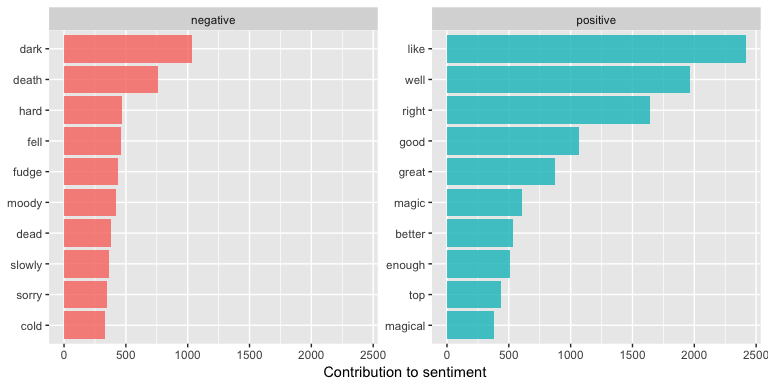 I am not having a good day.

is a sad sentence, not a happy one, because of negation. The Stanford CoreNLP tools and the sentimentr R package (currently available on Github but not CRAN) are examples of such sentiment analysis algorithms. For these, we may want to tokenize text into sentences. I’ll illustrate using the philosophers_stone data set.

The argument token = "sentences" attempts to break up text by punctuation. Note how “mr.” and “mrs.” was placed on their own line. For most text this will have little impact but it is important to be aware of. You can also unnest text by “ngrams”, “lines”, “paragraphs”, and even using “regex”. Check out ?unnest_tokens for more details.

Lets go ahead and break up the philosophers_stone text by chapter and sentence.

This will allow us to assess the net sentiment by chapter and by sentence. First, we need to track the sentence numbers and then I create an index that tracks the progress through each chapter. I then unnest the sentences by words. This gives us a tibble that has individual words by sentence within each chapter. Now, as before, I join the AFINN lexicon and compute the net sentiment score for each chapter. We can see that the most positive sentences are half way through chapter 9, towards the end of chapter 17, early in chapter 4, etc. 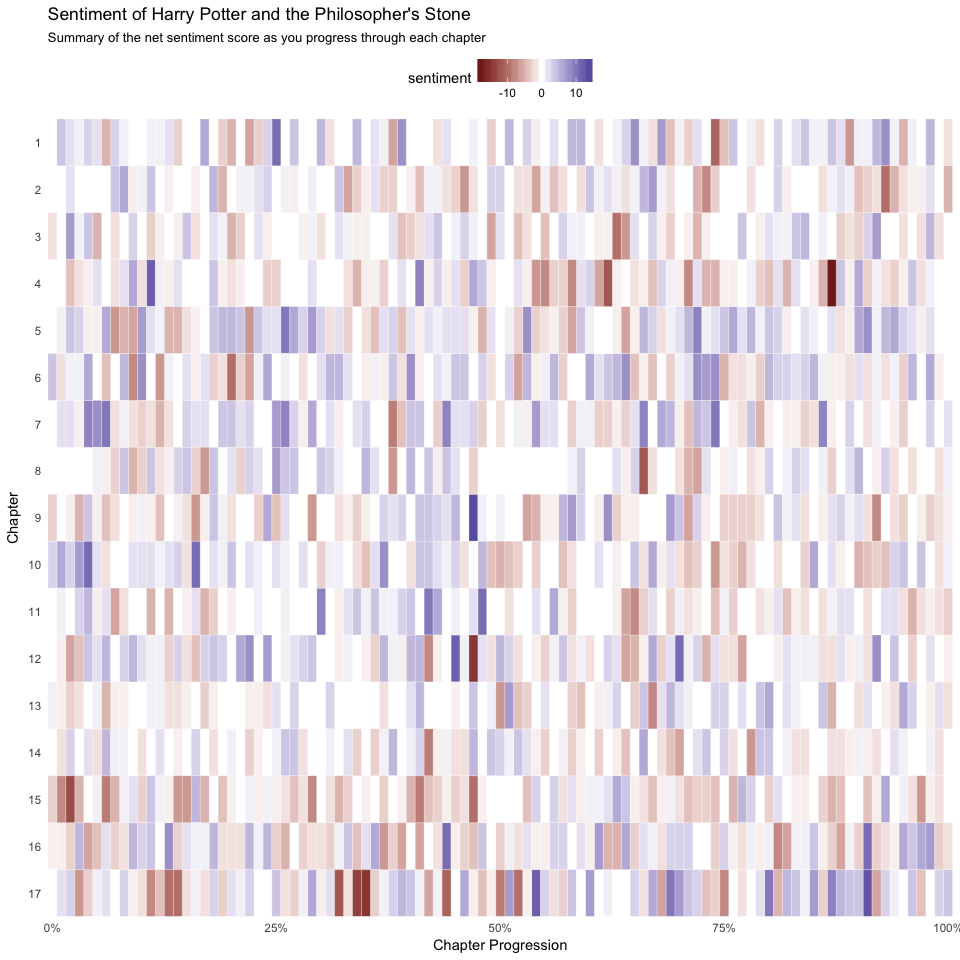