Readers make a number of judgments when reading graphs: they may judge the length of a line, the area of a wedge of a circle, the position of a point along a common scale, the slope of a line, or a number of other attributes of the points, lines, and bars that are plotted. Cleveland and McGill (1984) identified tasks or judgments that are performed when reading graphs and conducted carefully designed experiments to determine which of these judgments we make most accurately. They then designed a graph to take advantage of the knowledge gained from their experimentation. The result was the dot plot.

This tutorial introduces the dot plot and compares them to bar charts for graphical presentations. I also show how to go from a basic Cleveland dot plot to a more refined, publication worthy graphic. If you’re short on time jump to the sections of interest:

To reproduce the code throughout this tutorial you will need to load the following packages. The primary package of interest is ggplot2, which is a plotting system for R. You can build dot plots with base R graphics, but when I’m building more refined graphics I lean towards ggplot2. Note that I use the development version of ggplot2 which offers some nice title, subtitle, and caption options which I cover in the last section. You can download the development version with this line of code: devtools::install_github("hadley/ggplot2")

In addition, throughout the tutorial I illustrate the graphics with this artificial supermarket transaction data.

Most readers would have little problem understanding either of the basic versions of the dot plot or the bar chart. Consider if we want to view total revenues by city in are supermarket data. After a little data manipulation (note that I order the cities by revenue and then make the City variable a factor with the levels ordered accordingly; this will allow us to order the bars and dots in the following charts appropriately)…

We could view the data as a horizontal bar chart… 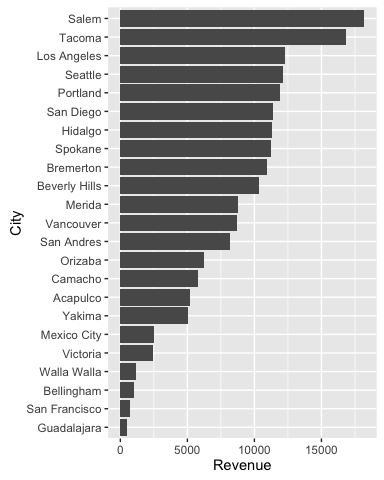 or a dot plot. 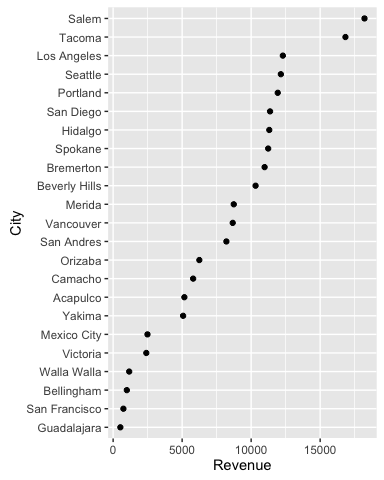 The power of the dot plot becomes evident when we want to combine and compare multiple points of information. Consider the case where we want to compare total revenues for males versus females for each city to see if we should have differing marketing strategies at each location.

We have a couple options to view this as a bar chart; however, none of them really gives us a good sense of the difference between gender…there is just too much stuff going on. 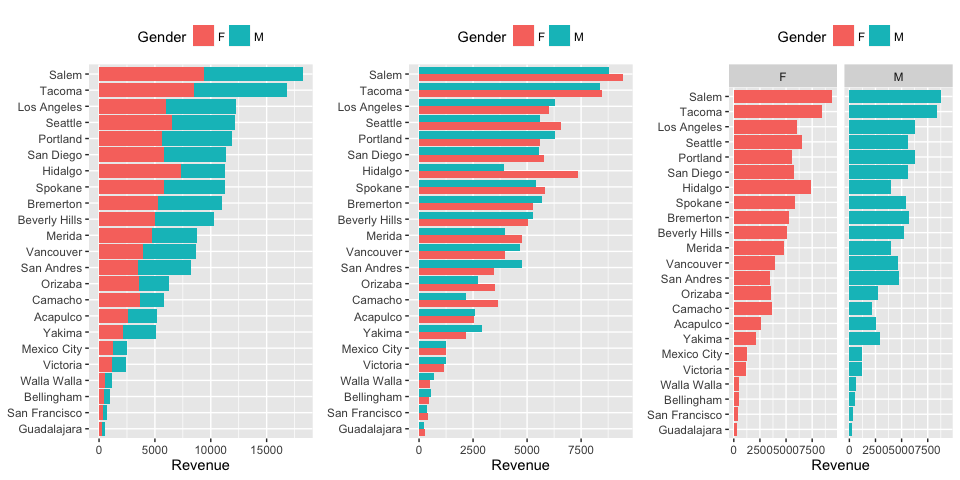 With a dot plot we can reduce the clutter and draw more focus to the single values that represent total revenues for males and females. 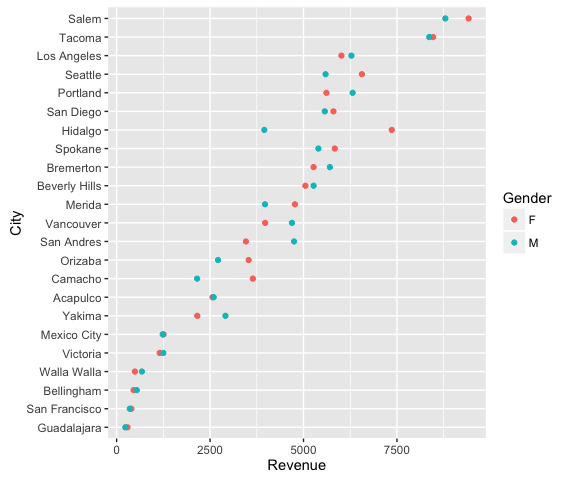 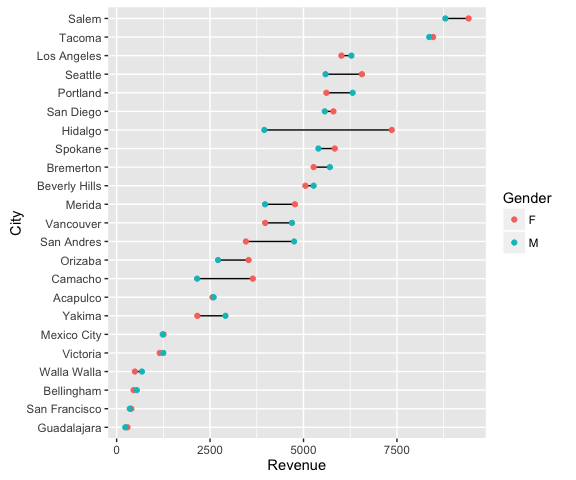 Depending on the number of categories (i.e. cities) you are trying to graphically display, and the range of the x-axis, it can be helpful to add value markers to the points to clarify the difference between the points. We could simply add text labels; however, as you see below this gets a bit cluttered. 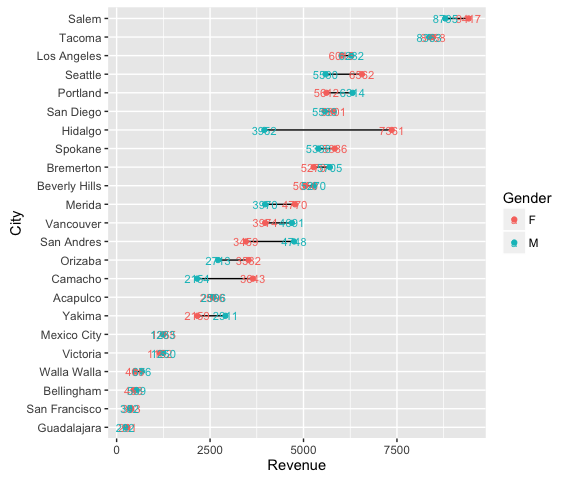 We can refine this a bit by creating specific label data frames and formatting the labels to display just ouside of their respective data point. 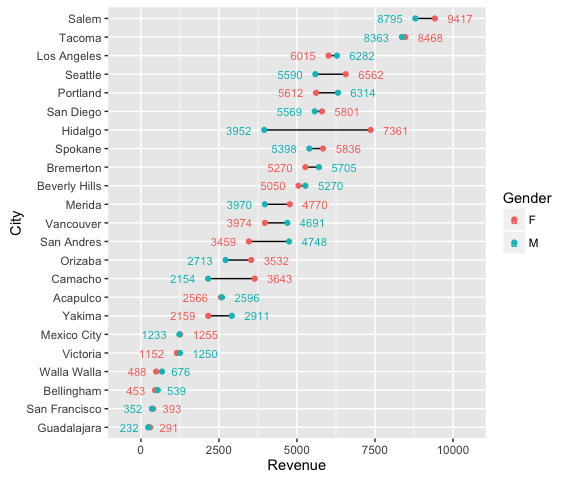 That’s not too bad but that introduces a new form of “busy-ness”. In this case, it may make sense to highlight just those locations where the revenue difference between males and females exceeds a certain magnitude. For instance, we can identify those locations where the difference between genders exceeds 20%. We can layer the plotting so that the first layer has some transparency and kind of sits in the background. The second layer of data, which are those cities where the revenue differences exceed 20% are not transparent and therefore gets highlighted. 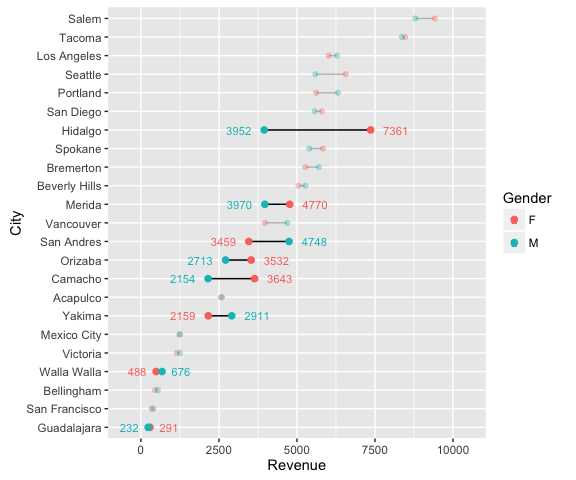 Let’s take this plot and do some minor revisions and formatting to better tell our story. First I’m going to modify the labeling so that for those locations that exceed a revenue difference of 20% between the genders I label the magnitude of the difference. 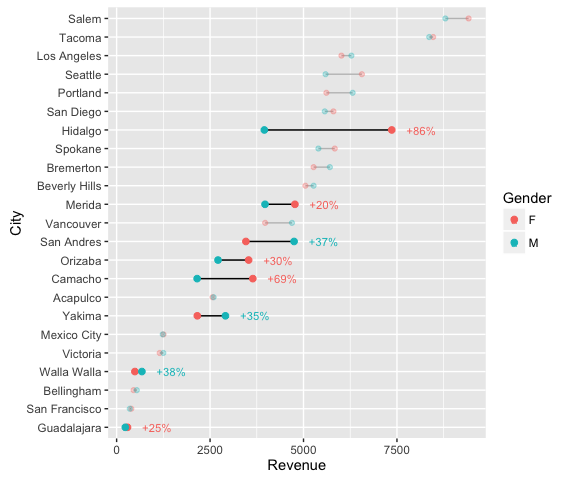 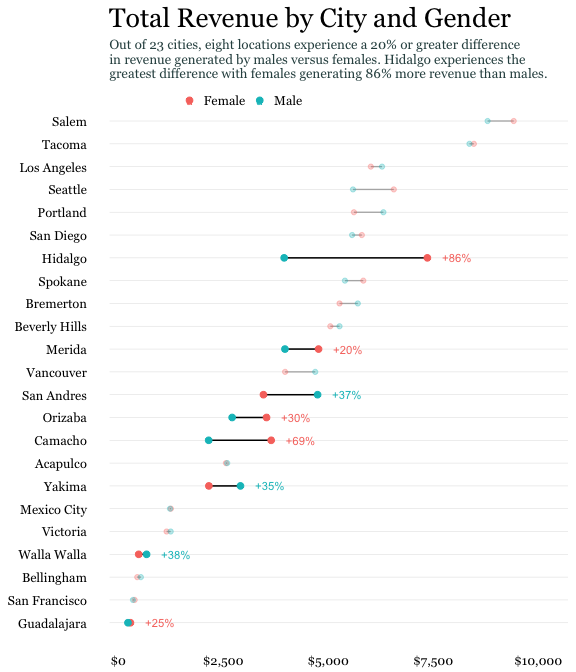 Cleveland dot plot are a great chart to simplistically illustrate and compare your important data points. When refined, they can easily communicate important aspects of your data to viewers. Hopefully this sheds some light on how to get started developing and refining dot plots with ggplot.